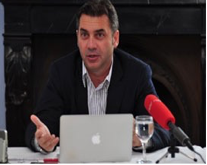 These worldwide projects are in China, Canada, USA and Europe. He was past CEO and President of Wolverine Resources Inc., an oil-upgrading refinery in Saskatchewan Canada. He has been in the technology development business for the past 25 plus years, primarily as an entrepreneur and inventor. He has also been involved in land development and commercial construction as an owner/investor for the past 27 years building and developing over $60 million in real-estate projects

Mr. Lonne Culhane was the Western Regional Manager and the third employee at Direct Energy in Calgary, Alberta. Lonne grew that organization from a start up to 150,000 Customers first year and 150 employees. Lonne Culhane was also instrumental in his previous role at Monster.com (TMP Worldwide) as Director of New Business Development where he successfully grew the Canadian Business within the Digital Media, recruitment advertising realm. Lonne was also the Regional Marketing Manager for MDU Communications, one of the largest competitors to Cable Television in Canada where Lonne’s efforts resulted in Shaw Communications purchasing the company.

She served as Director of Finance at PNI Digital Media Inc. She served as Chief Financial Officer of UC Resources Ltd. from January 2006 to October 31, 2006. She served as Consultant of UC Resources Ltd. since November 17, 2005 and served as its Controller. Over the past nine years, Mrs. Wood has acquired a full range of accounting and financial management experience in several industries such as resources, technology and investment companies, all of which were publicly listed on Canadian or US Stock Exchanges. Prior to this, she had worked her way up to Vice President of Canadian Mercantile Investment Banking Corporation. She served as a Director of First Mexican Gold Corp. Mrs. Wood holds an Honors of Commerce in Business and her professional designation as a Certified General Accountant in Canada. She is a Certified Public Accountant.

Georges E Alexis has a Bachelor of Science in Chemical Engineering and is also a registered Professional Engineer in both the state of Florida and the Province of British Columbia. Since his graduation from the University of West Virginia, he has been managing and implementing projects in various industries, including Pulp and Paper. He is extremely proficient at the use of dynamic mass and energy balance simulators. He was instrumental in the design and implementation of several anaerobic treatment projects to power generation projects in the Province of Alberta which yielded over $8 million per year in savings each. As a director of Sun Vault, he is tasked with the development and implementation of this renewable energy sector for the company. With over 16 years of process optimization and design experience, we are extremely pleased to have Georges on the team.